You know things are bad when they take away your garbage cans.

There they were, sitting out on the curb that bright autumn morning, proudly doing their job of holding a week’s worth of recycling and rubbish. Then they were gone.

It’s true I’ve been lax paying the bill. Wouldn’t you? It’s bad enough having to pay for water, electricity and heating oil. Insurance is a con but we pay it. The pathetic internet service they call Mid-Hudson Cable, that we’re always threatening to cancel. AT&T for our phones – their “Have you forgotten to pay your bill?” reminder call is sometimes the only actual phone call I receive all month.

But paying to have someone take the trash away feels so wrong. What exactly do the taxes around here pay for if the town can’t provide this basic service? It’s the bill I consistently avoid acknowledging, until they pile up and now – this. (Yeah, yeah direct debit. Does it hurt less, in lean months, to have an overdraft fee tacked on too? No, this is a game I play, that they’ll get their money when I’m good and ready. It gives me the illusion of control. Until – this.)

Did the neighbors see the truck taking our cans away? Oh who cares, the last people who lived in this house installed an above-ground pool on a pile of their refuse – I’m still finding styrofoam chicken trays, clam shells and Diet Coke bottles in the yard. They blasted modern country radio through outdoor speakers and filled the front yard with inflatable Halloween crap. We’ll never be that low.

I feel so judged. County Waste don’t want us. And the cans we’ve filled and dragged dutifully every week, proclaiming cozy camaraderie with the neighbors and “we’ve got it together! we remember what day it is!” are gone.

We were determined to do it ourselves when we first moved in here. I was constantly crossing the Walmart parking lot with a small bag of garbage while the recycling piled up in the garage for an eventual outing to the dump that never seemed to come. The van became a traveling garbage can and we had to acknowledge the truth – that we’re just not organized enough to deal with our own refuse.

Maybe some day. But in the meanwhile, I have to beg them to take us back. We promise to do better, just give us this one more chance!

PS They’re back. I didn’t hear a truck, just a scraping rolling sound and there they were. They’d even been cleaned. So that’s a small victory, right?

I accompanied Eric to Gonerfest in Memphis last week for the only US show of his legendary band the Len Bright Combo. LBC hold a special place for me because on a Saturday some fifteen years ago while sitting in Manhattan-bound traffic at the Holland Tunnel, I heard “Young, Upwardly-Mobile and Stupid” on WFMU and thought hmm that voice sounds so familiar! When Terre T back-announced the songs she’d played and talked about Len Bright Combo and Wreckless Eric I was so pleased to hear his name and that he was still out playing (not with LBC at that point but solo) and hadn’t disappeared into the ethers of time. Then a friend gave me a copy of Eric’s Greatest Stiffs collection, I started covering Whole Wide World and that led to us meeting in Hull of all places and the rest is covered in Do You Remember That.

For all sorts of selfish reasons I jumped at the chance to come along: wonderful friends to visit, barbq to consume, and a chance to soak up the Goner atmosphere that fits so well with Memphis – sweaty and loose with underpinnings of tradition and a healthy dose of dysfunction.

We stayed first with pals Ilene and Ben and their three kitties in a gorgeous mid-century house and had a great time eating barbq & catfish and watching American Pickers, Drunk History a bad HBO movie about the Loud Family and this poignant documentary Marwencol about Kingston artist Mark Hogencamp. It was a dream come true to lounge about with these two instead of the usual dashing in and out we’ve done when playing a gig in Memphis. In the midst of it all, we kept Facebook/email/cellphone vigil for word from the UK on the birth of Eric’s new grandchild – a son! a son! born to his daughter Luci and partner Simon. What a thrill and relief!

When the other Combo members arrived from the UK, I acted eager-to-please chauffeur like Norman in Robert Altman’s Nashville, happy to ferry the trio around town. I’d met Bruce the drummer before and he is a wondrous character but I hadn’t met Russ – I expected a bass-slinging brute but he was an urbane delight. Driving up and down the bungalow-lined streets of town, I got a kick out of the trio’s effortless banter – it’s something the way a band clicks back into place, where all their speaking voices even sound alike.

I threw my tin discipline to the wind and ate as much of the local southern food as I could: Payne’s barbq ribs and slaw; catfish, hushpuppies and collards at Soul Fish; cornish hen and ribs at Cozy Corner; sausage patties, eggs, grits biscuits and sausage gravy at Bryant’s. The rare time I ate a salad it was grilled and studded with bacon. We tried to stop for what has been called the best fried chicken in the US but the line outside Gus’s was too long and we were too hungry, though I don’t know how that happened because it seemed like we never went more than an hour and a half without food. At one point we met drummer Greg Roberson(who only last week was at our house recording for both me and Eric’s new records) and his adorable son at a Whole Foods for fresh juice but it was like throwing fuel on the fire, the vitamins only upped my desire for more fat and grease.

The Gonerfest bands were energetic and often Australian, but honestly once I’d seen Len Bright Combo (preceded by Deaf Wish who had me worrying for the band that had to follow that energy) I got what I came for. The Combo were teetering and tight at the same time, and funny and ferocious. It was sort of like watching someone else play your guitar – after playing next to Eric so many nights on stage, and he’s always an awesome force, I stood there with goosebumps watching him take off and thinking “I didn’t know you could do that!”

Afterwards I sold records from the merch table next to Deaf Wish and got hugs from Scott & Charlene’s Wedding who we hosted last week at home in New York. I love these Australians so much, wish I could adopt them. It was a treat to see them play at a backyard show the next day, feeling them turn the world on with their charm.

Then we faded away from Goner and out to the Stax Museum which contains many interesting artifacts, loads of info and the incredible wall of records, but lacks the emotional wallop you want – even though they’ve recreated the studio, Memphis is so much about place and…well, the real place is gone and the most feeling I get is being outside the building, on this street, in this neighborhood where the original theater stood. But it is still a must to visit. 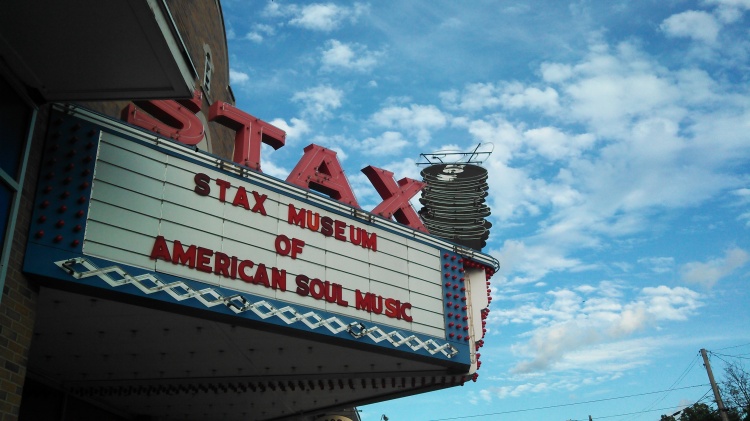 To cap off the Stax experience, we caught the end of Robert Gordon’s talk about his Stax book Respect Yourself. He’s a wonderful speaker, and had a guest Sidney Kirk, who had gone to high school with Isaac Hayes and played piano in his band and I wished they’d had him in the Stax Museum talking because he made history come alive, it’s often the people on the sidelines of the inside who do.

We were staying now with old friends Robert and Candace and their darling daughter Vivian and we all had birthday cake and I passed out on the couch, not from drinking but a complete sensation overload. The last day we accompanied the Maches to a front porch cookout with nonstop platters of fried chicken and beef tips, and then took Russ to the airport (Bruce left the day before). We went by the finale of Gonerfest and then sat down in a bar to hear barefoot soul lady Linda Heck play with Ross Johnson on drums. Ross took a phone call as the first song started, and played with one hand while hoisting a flip phone to his ear with the other. We’d seen Ross play earlier in the week with a whole gang doing Like Flies On Sherbert, the Alex Chilton album he’d played on, and he’d sounded great. I heard him order a “Diet Croak” from the bartender.

Yes no Memphis visit would be complete without a visitation from Chilton’s ghost. All the exes, girls he’d herded and produced in bands like the Clits and Hellcats were present, and there was a moment when two of them spotted Eric. It is well-noted and documented that Alex loved Eric’s records but they never got a chance to know each other. Still, the girls knew and I saw them fix their big shiny eyes on my boy and come floating across the room like hungry flesh eaters in Night Of The Living Dead. It was scary, it was sweet. I doffed my imaginary Norman chauffeur cap and took my leave. “You’re on your own here.”

Two minutes later Eric emerged from the bar, wiping sweat off his brow. We walked off into the sunset to find one more meal.